In Hitchcock’s Rear Window (1954) a photographer looks out from an apartment on West 10th St onto the buildings of West 9th, where a dancer, a composer and a sculptor lead their creative lives. The street had been home to writers, painters, muralists, novelists, screenwriters and decorators for more than 100 years, including Edna St Vincent Millay, Dashiell Hammett and the journalist Ida Tarbell. Christopher Gray writes in the New York Times (15 July 2012), “West Ninth Street, from Fifth to the Avenue of the Americas, has a smorgasbord of picturesque houses, some over a century old, but then many village blocks have that. What other blocks don’t have is the street’s trio- nay, a full quartet – of truly Jack-in-the-Beanstalk-sized wisteria vines growing up the facades of three houses”, which he depicts folding in on itself “like a leathery Laocoon, growing, constantly growing, on this block with one foot in the 19th century and another in the 21st”.

PGH moved into an apartment on 29 West 9th St in 1953 and kept it for the next ten years. Maurice Sendak, author of Where the Wild Things Are (1963) was drawing for comic books and designing windows for Tiffany & Co when he lived upstairs or downstairs in the same building. Diariest Anaïs Nin lived at 35 West 9th, as did her friend the poet Sylvia Spencer. The modernist poet Marianne Moore lived there too from 1966 until her death in 1972. The screenwriter, journalist and playwright S.J. Perelman lived above the Hudson Hand Laundry at 64 West 9th and in 1956 won an Academy Award for the screenplay for Around the World in 80 Days. The painter Sarai Sherman bought the house at no. 17 West 9th in 1961 and was still living there in 2012. The journalist Herbert Asbury lived at at 38 West 9th until his death in 1963. 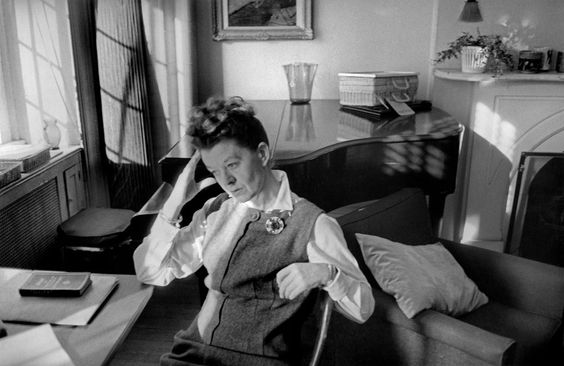 Those who live there now include the writer Jay McInerney and Wendy Goodman, Design Editor for New York Magazine (whose apartment is pictured above). The playwright Terrence McNally lived on West 9th until his death on 24 March 2020. He recalled for the Times (19 April 2020), “I fell in love with my apartment the moment I opened the door. I didn’t know at the time that it had so many theatrical reverberations: Jed Harris, a very controversial producer in his day, is said to have lived in the building; Agnes de Mille, too. I often call this neighborhood ”Lower Fifth.” It’s a unique part of New York, these few little blocks. They have this elegance, and I’ve always loved seeing the older women, who I’m sure are widowed by now, on the street. They’re always made up and beautifully dressed — some of them still wear gloves — and at Christmas, they make cookies for all the doormen. They’re the women of the old Peter Arno New Yorker cartoons, the women who wouldn’t be caught dead on the street in slacks or with their hair in a scarf. There are very few of them left; each year, there’s one fewer. It’s very contemporary, too, though. It’s New York as a place for doers, achievers, people who are involved. Not nostalgic. Not lazy. There’s a briskness to everybody’s step. I feel at home here — you know it when you’ve found a place you belong.”