By Suzanne Robinson on November 1, 2020in Comment, Links, Recordings

From the time of his arrival in Morocco in 1947 Paul Bowles wrote regularly to PGH of his discovery and appreciation of Moroccan musics. In 1951, for example, he wrote about an evening of Berber music accompanied by dancing, self-immolation, blood-letting and blood-drinking.

Music of Morocco, recorded by Paul Bowles and published by the Library of Congress in 1959. Newly released on CD by Dust to Digital, 2016.

At the end of the description he expressed his astonishment that this ancient music was still being performed and had never yet been recorded commercially. He also expressed his fear that with the encroachment of European popular music Morocco’s time-honoured traditions would disappear. In the meantime, Glanville-Hicks was pursuing an interest in non-Western music and forging a mutually useful relationship with John Marshall and Chadbourne Gilpatric, staffers at the Rockefeller Foundation, an organisation that she knew offered funding for ethnomusicological projects. In 1956 Glanville-Hicks was pressing the Foundation to fund a visit to the US of the Indian musician and music administrator Narayana Menon.
Read More

In about 1972, when Glanville-Hicks was renovating her house on the Greek island of Tinos, she ordered a stained-glass, lead-paned window from a London glazier and installed it over the lintel at the front door. Underneath is the motto “tout en bonne heure” (all in good time).The crest depicts (according to Fairbain’s book of crests of the families of Great Britain and Ireland of 1905) a lion’s gamb (leg or shank) issuing per chevron or and gu (in red and gold).

All of the crests of the English branch of Hicks depict a stag or buck’s head whereas this one is associated with the Irish branch of the surname. Glanville-Hicks’s ancestors on her father’s side however came from Cornwall. In the 1891 census there were about 12,000 Hicks in England and Wales with 1600 of them in Cornwall. Of those there were more than 60 on the island of St Agnes in the Scilly Isles, where her Hicks forebears had lived for generations—at least as far back as the first parish records in the 1720s. Most of them were farmers, boatmen and ship’s pilots. Perhaps she chose the Irish crest because she preferred it. When she lived in Sydney (from 1975) she had letterhead printed with the crest in blue, not just a sign of an aristocratic pose but a reminder of the house she built in Greece.

By Suzanne Robinson on October 30, 2020in Comment
In the recent biography of Vaughan Williams by Keith Alldritt he mentions that Glanville-Hicks and Vaughan Williams met on a summer visit to Majorca: Glanville-Hicks phoned Vaughan Williams and his wife Ursula and invited them to lunch with Robert Graves. This was in 1956, when she was collaborating with Graves and Alastair Reid on her opera Nausicaa. Alldritt then identifies Glanville-Hicks as a critic on the New York Herald Tribune (although she had left the paper the year before) and describes her as “an ebullient Australian who often dressed as a man”.
Read More 0

Peter Sculthorpe’s home in Woollahra in Sydney has been offered for sale. The agent’s website includes photos of the studio and courtyard where PGH spent many happy hours, none more so than on the day she was awarded an honorary doctorate at Sydney University thanks to his recommendation. The house for her would have been a sacred site, and the photo only needs a red MG parked out the front to represent it as it was when she first went there in 1975.

By Suzanne Robinson on October 4, 2020in Links, Recordings

This month’s BBC Music Magazine includes an article on Australian composers and recommends the ABC recording of Glanville-Hicks’s Etruscan Concerto by the Tasmanian Symphony Orchestra. On the TSO website Stephanie Eslake describes it as “utterly delightful”. 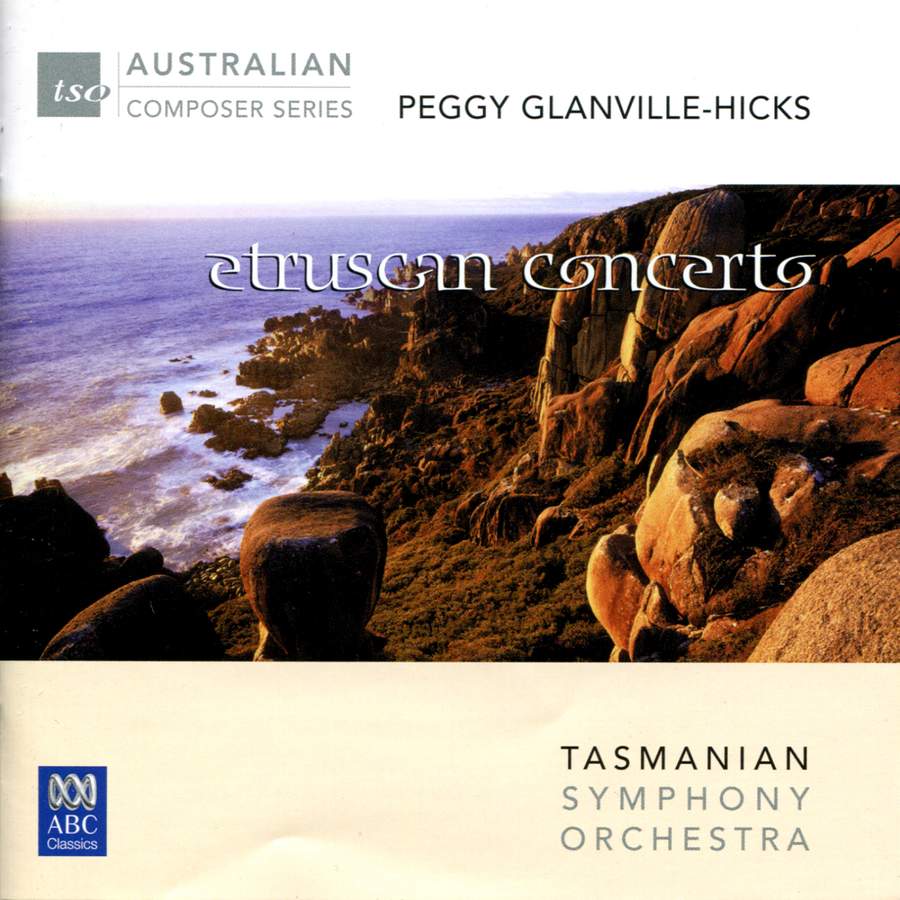 The Nicholson collection at the University of Sydney’s Chau Chak Wing Museum holds three artefacts donated by PGH in 1984, including this vase dating from around 500 BC. All three sat on the mantlepiece in her home in Athens. This one, at 20cm high, seems very large as well as being extremely fragile for something that was smuggled in her clothing on board the flight from Athens to Sydney in 1975, but that’s what she alleged she did. The Museum claims to hold the largest collection of ancient antiquities in the southern hemisphere: see the other artefacts donated by PGH at https://www.sydney.edu.au/museum/discover-our-collections/nicholson-collection.html

By Suzanne Robinson on August 11, 2020in Comment, Links, Quotes

In Hitchcock’s Rear Window (1954) a photographer looks out from an apartment on West 10th St onto the buildings of West 9th, where a dancer, a composer and a sculptor lead their creative lives. The street had been home to writers, painters, muralists, novelists, screenwriters and decorators for more than 100 years, including Edna St Vincent Millay, Dashiell Hammett and the journalist Ida Tarbell. Christopher Gray writes in the New York Times (15 July 2012), “West Ninth Street, from Fifth to the Avenue of the Americas, has a smorgasbord of picturesque houses, some over a century old, but then many village blocks have that. What other blocks don’t have is the street’s trio- nay, a full quartet – of truly Jack-in-the-Beanstalk-sized wisteria vines growing up the facades of three houses”, which he depicts folding in on itself “like a leathery Laocoon, growing, constantly growing, on this block with one foot in the 19th century and another in the 21st”.

By Suzanne Robinson on August 11, 2020in Books, Comment, Links

The Australian publisher Wirripang has published a new book on the composer Dulcie Holland, A Musical Missionary: The Life and Music of Dulcie Holland by Rita Crews and Jeanell Carrigan. Holland arrived for studies at the Royal College of Music in London in 1937, and was to become one of a select group of women who won the Blumenthal scholarship: Helen Perkin had won it three times and Elisabeth Maconchy once. PGH on the other hand won the Carlotta Rowe award (the Musical Times spelling her name “Peggy Winsome Stanville Hicks”), also awarded to Ruth Gipps, Patria Morgan and Helen Hunter. The Blumenthal was worth more than the Carlotta Rowe, and so might have been seen as more prestigious, but the war unfortunately prevented Holland from using it.

PGH and the Etruscans

By Suzanne Robinson on August 1, 2020in Articles, Links

PGH began considering writing a piano concerto, the work that would eventually be named the Etruscan Concerto, in early 1953. Her short score is is dated 13 July 1954, suggesting that she had completed the first draft a few weeks before she arrived in Italy in August that year. Her destination was Fiesole, on the outskirts of Florence, a town based on the village of Faesulae, one of the main cities of the Etruscan confederacy. She had been to Florence once before, in April 1937 on holiday from studies in Paris. Then she must have visited the Museo archeologico nazionale, housed in a Medici palace, which holds terracottas, furniture, sarcophagi, ossuaries, vases and other Etruscan artefacts. In Fiesole in 1954 she could also have visited the Roman theatre, first-century baths, a Roman temple and tombs as well as an Etruscan museum, and on 29 August, on her way to Paris, she stopped in Ferrara and then Comácchio, which had been occupied by the Etruscans and Gauls. In a lagoon northwest of Comácchio is the remains of the Greco-Etruscan city of Spina where artefacts such as vases were found. The title of the concerto thus honours this visit to Italy as well as the vivid descriptions of Etruscan life in D.H. Lawrence’s Etruscan Places (1932). Unfortunately, even if it was personally a memorable experience, and even if seeing Etruscan remains and sites fuelled her interest in archaeology and the ancient world, she left no description in words. In Apollo magazine, however, Xavier F. Salomon recounts how he travelled to all the sites mentioned by Lawrence, including museums in Rome and Florence, and this gives the flavour of what PGH herself might have discovered only ten years after Lawrence himself had been there.

Getty images has released an image of PGH and Stanley Bate probably taken in Sydney in 1940. The image is published on the Telegraph‘s website alongside Simon Heffer’s profile of Bate as a composer “like Vaughan Williams on speed“. Interestingly, the Telegraph has inexplicably chopped off PGH’s head and by doing so has erased the most interesting element in the image: the portraits of Stravinsky and Bartok tacked on the wall next to the piano. Bate’s admiration for Stravinsky is well known. That he thought the same about Bartok is a revelation, though not a surprising one.